A lot of people don’t know the meaning of water softener salt. Sure, some have encountered the word before but still no clue what it means. For you to finally understand what it is, this is a product that can remove ions from water that make water hard. Hard water refers to water with above average mineral content. Typically, this refers to minerals Calcium and magnesium. If the water has high amounts of these minerals, it will make the water less able to dissolve other solutes, like soap. Hard water can also lead to clogged pipes due to increased lime scale build-ups. If this kind of build-up happens, it can make the heating less efficient and it can produce more wear and tear on the pipes and water dependent household machines. 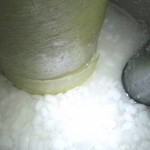 The need for this product, the water softener salt is used by many companies and households. They use this to soften the water for them to be able to reduce their heating bills and maintenance costs for piping and machinery. A water softener salt is designed to extract positively charged ions, calcium and magnesium. However, softeners are sometimes used to remove iron as well.

There are three types of water softener salt that is generally used today:

The salt reservoir must always be checked every month to ensure that the water softener salt level is at least half full. Don’t expect to see immediate softening results after adding salt softeners because it takes time to dissolve. Also, you should be mindful when buying a water softener that salt is corrosive and can break down pipes over time. Also, salt-softened water may not be suitable for babies due to its high sodium content. There is also a salt free water softener that you can consider if you have babies in your home.